Sometimes, when researching my genealogy, the little things are infinitely the most important. And that’s the case for this recent find: 197 centimorgans of shared DNA across six segments led me unexpectedly, finally, to my great-great-grandmother’s family tree. I want to share how I solved this Drag family mystery–my recipe for success–in the hopes that it will help someone else break down their own brick wall (and connect me to a few more cousins, too).

At the age of 18, my great-great-grandmother, Wiktorya Drag, left the village of Kłyżów, Poland and boarded the SS Vaderland en route to New Jersey. She listed her nearest relative as her father, Jozef Drag, and for years, this was the only information I had on her past. She married my great-great-grandfather, Mikołaj Kuznicki, in New Jersey in 1911; opened a bar and hotel in Dunkirk, New York; and raised eight children–five sons and three daughters–of her own. But I’ve always wondered who she visited when she returned to Poland in the fall of 1913; and now, I’m a little closer to finding the answer.

It all started with a new cousin match on AncestryDNA; we shared enough DNA to make us third or fourth cousins, but I couldn’t find any common ancestors listed in their family tree. That’s when I turned to the Leeds Method–a method of grouping DNA matches and assigning them to “grandparent” quadrants with little or no previous information–to figure out which sets of great-great-grandparents (or great-great-great-grandparents) we shared.

Here’s how it works: in a spreadsheet, I listed all of my AncestryDNA matches through my potential fourth cousins; then, I listed my four grandparents’ surnames in the header columns, assigning each a color. The next step is to check each cousin match to find the matches you have in common with them. Each match I had in common with “Cousin 1,” for example, was also marked as light blue, and all of them were related to me on my Gates line. The same holds for the Miller, Kuznicki and Zielinski families. 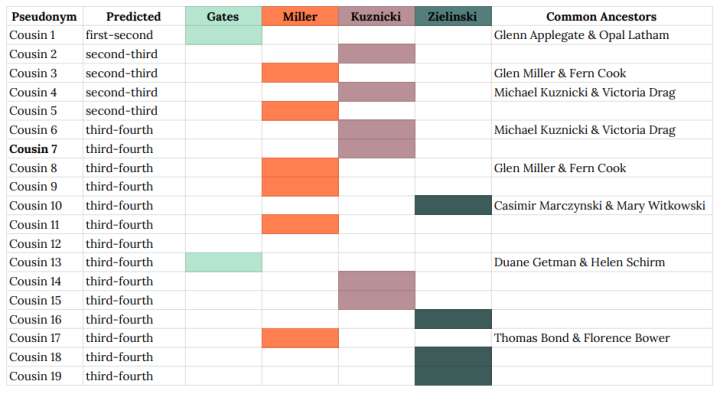 It was just a matter of which great-great-grandparent, Michael or Victoria. But that proved to be even simpler to find: I searched my cousin matches for a cousin I knew, without a shadow of a doubt, was only related to me through Michael (their great-grandfather was Michael’s older brother). Since “Cousin 7” did not share any DNA with this Kuznicki cousin, I knew that they had to be related to Victoria.

I started with the New Jersey Marriage Index, 1901-2016, the first index I found Michael and Victoria listed in, other than their Ellis Island passenger lists. I searched for the surname Drag–Victoria’s maiden name–in the hopes that I would find a sister or brother who had also been married in New Jersey around 1911. There were no men with the surname Drag, but there were five women: Gertrude (Drag) Szymankiewicz; Jorefa (Drag) Bastek; Rozalia (Drag) Patka; Angela (Drag) Trela; and Weronika (Drag) Zajac.

I ruled out four of the women–Gertrude, Jorefa, Rozalia and Weronika–as their married names didn’t match any of the surnames in my cousin match’s family tree. But Angela Drag’s married name, Trela, did appear in my new cousin match’s family tree (but written as Trella, instead). My next task was to confirm Angela’s connection to Victoria and, ultimately, to the Drag family from the village of Kłyżów, Poland.

A search through the New Jersey newspaper archives on Newspapers.com yielded no results; neither did the Pennsylvania index or the New York State index. So I branched out–searching for “Anna Trela” and “Angie Trela”–with still no success. On a whim, I searched for “Nellie Trela” in all three indexes (“Nellie” sounded similar to Aniela in my mind), and I found an article in The Pittsburgh Press about a woman named Nellie Trella who was “fined $250 in a fight over a man.” She owned a boarding house in Aliquippa, and while a fight isn’t out of the ordinary for a member of the Kuznicki family, I still didn’t have proof of a connection between Victoria and Nellie.

I started reaching out to Kuznicki cousin matches, asking them for any information on the Drag side of our family tree. And that’s how I cracked the case: one cousin had a family photo with five names–Nellie, George, Ed, Matt and Joe–written on the back. She remembered hearing stories of an Aunt Nellie growing up, and she confirmed that her surname was Trella. My new cousin match, according to their family tree, was related to Joe Trella (Nellie and George’s oldest son), and that made us 2nd cousins 2x removed. I’d finally found another member of the Drag family tree: Victoria’s younger sister, Nellie.

It’s all in the little things; I guess that’s my “recipe for success.” The Leeds Method, marriage indexes and newspaper archives are helpful tools, but if you take anything away from this how-to-guide-of-sorts, remember this: even if your theory seems unlikely, keep researching; you never know where the search will take you. I mean, 197 centimorgans of shared DNA broke down a brick wall seven years in the making; that’s pretty cool.

23 thoughts on “How I Solved It: From DNA to Nellie Drag” 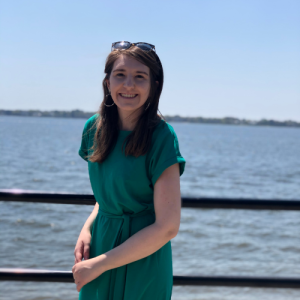