So, we’re Catholic. Really Catholic. I grew up attending Sunday School, memorizing my Acts of Contrition and finding excuses to skip out on Reconciliation every year. It was great (heavy on the sarcasm–sorry Mom!), and when I started researching my genealogy, it came as no surprise that there were not one, not two, but dozens of nuns in the family tree. But one family, in particular, caught my attention this week. Why? Half of the sisters–three of the six–chose to become a Sister of Saint Francis: Sister Mary Leonora, Sister Mary Felicia and Sister Mary Maristella. And what are the odds?

It all started with the matriarch of the Wagner family, Mary Wilhelmina (Mead) Wagner; she was born on March 12, 1864 in Alden, New York to C. Daniel Mead and Mary Frances Reinhard. Daniel was born in Ireland–while Frances hailed from Germany–but both grew up in devoutly Catholic households. The couple passed down their commitment to faith to their daughter, Wilhelmina, and she and her husband, Matthias, did the same for their own family. Matthias and Wilhelmina had nine children–Mary Eva (b. 1887), Joseph George (b. 1889), Charles David (b. 1893), Frances Clara (b. 1894), Lauretta (b. 1897), Anna (b. 1898), Emma Matilda (b. 1899), Martha (b. 1902) and Matthias Lawrence (b. 1904)–and they made their home in Darien Center, New York.

The first sister to become a Sister was Mary Eva; she was born on April 22, 1887 in Alden, New York, and I’ve found her ricocheting between neighbors’ houses throughout her teenage years, working as a household servant in exchange for room and board. Eva was named after a long line of Mary’s–her mother, grandmother, great-grandmother, great-great-grandmother and great-great-great-grandmother were all named Mary Something–and she was expected to devote her life to the church. She took her perpetual vows–marking her total commitment to following in the footsteps of Christ–on July 3, 1919 under the name Mary Leonora. Sister Mary Leonora died four years later–at the age of 35–on September 7, 1931, much too soon.

Then there’s Frances Clara, who turned out to be the most revered and deeply-respected nun in the family; she was born on April 13, 1894 in Alden, New York, and by the age of 16, she had left school to help support her siblings. She took her perpetual vows on January 2, 1920–under the name Sister Mary Felicia–and immediately resumed her studies, showing a lifelong devotion to both the church and education. After completing her preparatory courses, Sister Mary Felicia was assigned to teach at St. Mary of Sorrows’ primary school in Buffalo; she later taught at St. Mary’s on the Hill in Lancaster before serving as the local superior and principal at St. Cecilia’s in Sheldon. In 1955, she had the honor of being named the principal of St. James School in Buffalo and became the first superior of the convent only two years later. She passed away on January 29, 1988 at the age of 93, leaving hundreds of students to mourn her:

As we gather here this morning our hearts are filled with gratitude, for the life of Frances Wagner, known for the past seventy-three years as Sister Mary Felicia. Her early family life with her parents, her five sisters, and three brothers, must have been the source of her deep faith, her joyful spirit, and her sensitive concern for others.

As an educator, she possessed the ability to recognize the gifts and the strengths of each child. Her fun-loving nature permeated the classroom as she employed interesting methods and strategies of teaching in a pleasant and relaxed setting. I witnessed this, as she was my teacher in two different grades.

In later years, all of us remember her radiant smile, her ready wit, and her enjoyment of the simple things of life. She was kind to all and very grateful for the smallest favor. It was evident that she was always present to her God in the here and now events of daily life. It appeared that her greatest joy was to give back to God her rare and precious gifts.

Even in very recent times in her weakened condition, her innate courtesy was always present. It seemed that her openness to God and to all creation gave her the freedom to be gentle, peaceful, and joyful in the Lord.

Sister Felicia, your life was a total response to a loving God. In your prayerful spirit, you were willing to love until the very end. May God’s final surprise be a sharing of His life with you. (Sister Grace Marie, 1988)

And last–but not least–is Lauretta; she was born on June 5, 1896 in Alden, New York, and her older sister’s sacrifice in the way of education allowed her to attend school into her teenage years. Like her sisters, she took her perpetual vows on July 7, 1922 under the name Sister Mary Maristella. Maristella–or “Stella Maris”–is a title of the Blessed Virgin Mary meaning “Our Lady, Star of the Sea,” and I think it’s an absolutely beautiful–albeit unique–choice. I don’t have any other information on Sister Mary Maristella’s life, as she passed away less than a year later on January 7, 1923. She was 25 years old, and her oldest sister, Sister Mary Leonora, died eight months later of the same illness; I cannot begin to imagine the void their deaths must have left in the Wagner family. 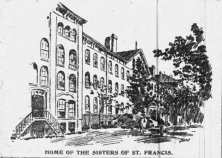 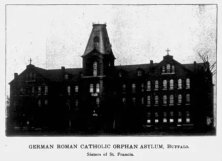 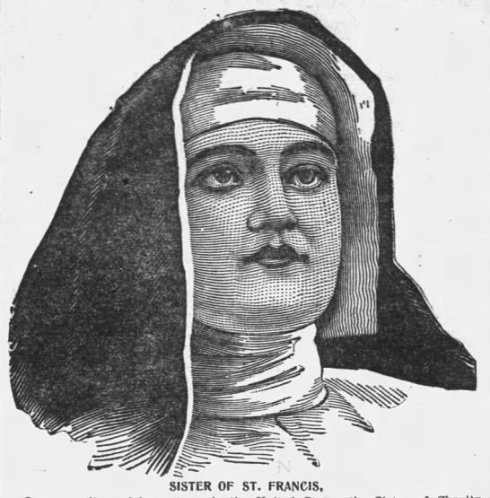 The Sisters of Saint Francis–the order my three 3rd great-aunts entered into–lived, worked and studied at 400 Mill Street in Williamsville, New York. The Sisters opened an orphanage in the city of Buffalo, and their main commitment was to caring for orphaned children and looking after their education. But they also opened a “Home for the Aged,” volunteered in local hospitals and started a junior college on their remaining property. Today, the Sisters have given up their habits, and their numbers are dwindling–but they’ve combined with two other orders in the area, and they are still committed to improving the lives–young and old–of the members of their community. Sister Mary Leonora, Sister Mary Felicia and Sister Mary Maristella’s commitment to working on behalf of others is inspiring, and I hope to be the kind of teacher that my own students remember as having “the ability to recognize the gifts and strengths of each child,” too.

It’s no wonder my great-grandmother–their niece–entered a convent in her early twenties. But that’s a story for another time.

21 thoughts on “Get Thee to a Nunnery”